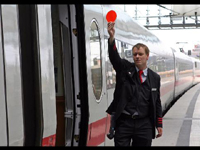 Germany's coalition government between the Social Democratic Party and Chancellor Angela Merkel's Christian Democrats is split over plans to sell shares in the railway. One proposal would separate train operations from the track network prior to an initial public offering, with the tracks remaining state property because taxpayers would pay for its maintenance.

Deutsche Bahn is optimistic for 2008 after the first quarter "went well," the company said.

Deutsche Bahn AG is the German national railway company. It came into existence in 1994 as the successor of the former state railways of Germany: the Deutsche Bundesbahn of West Germany and the Deutsche Reichsbahn of East Germany. It also gained ownership of former railway assets in West Berlin held by the VdeR.