Spain's Inditex said on Monday it expects like-for-like sales growing 4 percent in the period to 2010. 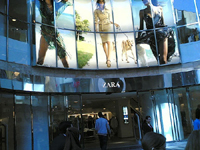 Inditex will increase its dividend 25 percent to 1.05 euros per share.

Inditex is a large Spanish corporation and one of the world's largest fashion groups. It is made up of almost a hundred companies dealing with activities related to textile design, production and distribution. Amancio Ortega Gaona is the founder and current chairman of Inditex. He is also Spain's richest man.

Inditex runs over 3,000 stores worldwide and owns brands like Zara, Massimo Dutti, Bershka, Oysho, Pull and Bear, Zara Home, Often and Stradivarius. Most stores are corporate-owned since franchises are only conceded in countries where corporate properties can not be foreign-owned (in some Middle Eastern countries, for example).

The group designs and manufactures almost everything by itself, and new designs are dispatched twice a week to Zara stores.

Inditex headquarters are located in Arteixo, a village in the province of La Coruña in Galicia, north of Spain. It is there where almost all its merchandises are manufactured. In addition they have another big plant mainly responsible for shoes’ design, production and distribution in Elche, a well-known town of Alicante's province in the Spanish Mediterranean coast.