E.ON AG’s interest in large acquisitions this year is fading fast as it seeks to focus on integrating earlier takeovers, said the company's chief executive. 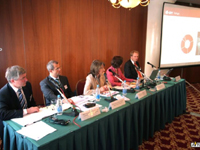 E.ON AG is an energy corporation, one of the 30 members of the DAX stock index of major German companies.

E.ON, based in Düsseldorf, Germany, may make smaller acquisitions, Wulf Bernotat said without giving more details."There is a lot on our plate for this year, which at the same time reduces the appetite to go after large deals," Bernotat added.

The CEO does not expect any large takeover to happen in Spain due to political obstacles, after Electricite de France expressed interest in Spanish utility Iberdrola.

"I would not necessarily expect a megadeal, but maybe some restructuring" in the Spanish market this year, Bernotat said.

Infrastructure funds have expressed interests in the German high-voltage transmission grids E.ON has put up for sale, the chief said.

Bernotat reiterated E.ON prefers to swap the German power plants which the company wants to divest for other assets.

E.ON is one of the major public utility companies in Europe and the world’s largest investor-owned energy service provider. It has, for example, acquired Sydkraft in Sweden and Powergen in the United Kingdom. These have now been rebranded to E.ON Sverige and E.ON UK respectively. It was trying to acquire Endesa in Spain at 2006, however this acquisition was overtaken by a joint bid from Italian utility ENEL in conjunction with Spanish company Acciona. However E.ON did get to acquire about €10b of assets that the enlarged ENEL was required to divest under EU competition rulings.