Dairy Crest Group Plc warned over a rise in raw material costs on Friday and said unprecedented milk price growth would result in a loss on one supply contract. 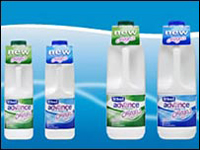 The british food company expects to make 4.5 million pounds ($9 million) loss on the contract with an unnamed customer, which it will treat as an exceptional item this year.

Disregarding such one-off costs Dairy Crest said it will meet profit expectations for the full year to March 31, 2008 , though along with other food makers it faces inflationary pressures in a number of commodity areas including resin, diesel, vegetable oils and energy.

A previously announced fine of 9.4 million pounds by the Office of Fair Trading for price fixing will also be treated as an exceptional item this year, it said.

The company was expected to post earnings before interest, tax, depreciation and amortisation (EBITDA) of 149 million pounds for the full year to March 31.

Dairy Crest Group plc is a major dairy products company in the United Kingdom. Its brands include Cathedral City cheese (which is made in Davidstow, a place in Cornwall which is not a City and does not have a Cathedral), Utterly Butterly, Vitalite, Clover, St Ivel and FRijj. They also deliver milk to around 1.1 million households via their milkmen.