The number of Americans filing first-time claims for unemployment benefits fell last week, while a less volatile measure of the labor market rose to a 2 1/2-year high. 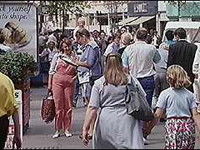 Initial jobless claims dropped by 9,000 to 366,000 in the week that ended March 22, the Labor Department said today in Washington. The four-week moving average of first-time claims increased for a third straight week, reaching 358,000, the highest since October 2005.

The figures indicate that U.S. employers are cutting jobs or delaying hiring, as the deepening housing slump raises the odds of a recession. Fewer jobs may slow consumer spending, which accounts for more than two-thirds of the economy.

Another government report showed the U.S. economy grew at an annual pace of 0.6 percent from October though December, weakened by a deepening housing slump that may be bringing the six-year expansion to an end. The gain in gross domestic product followed a 4.9 percent third-quarter growth rate, the Commerce Department said today in Washington. Measures of inflation were revised down and corporate profits dropped.

Claims may have been affected by a strike at General Motors Corp.'s largest axle supplier that shut down or reduced output at some of GM's North American manufacturing facilities. Workers who indirectly lose their jobs because of the strike may be eligible to file claims, and figures show this occurred in Ohio and Michigan, a Labor Department spokesman said.

The number of people continuing to collect unemployment benefits fell to 2.845 million in the week that ended March 15, from 2.85 million the prior week, when it reached its highest since October 2005.

Job losses, falling home prices and slowing retail sales are indicating a worsening economy. The Federal Reserve on March 18 reduced the benchmark interest rate by three-quarters of a percentage point to 2.25 percent to help mitigate the risks of a recession and shore up confidence in financial markets.

"Recent information indicates that the outlook for economic activity has weakened further,'' policy makers said in a statement.

Employers cut 85,000 jobs in the first two months of this year, the most in nearly five years, Labor Department figures showed this month. Payrolls likely fell again in March, according to the median forecast of economists in a survey.