Aircastle Ltd. curtailed its quarterly dividend by more than 64 percent to retain additional capital that can be used to increase its liquidity position and make investments. 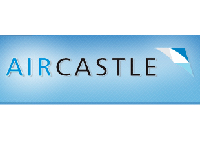 "The $0.25 per share dividend reflects roughly one third of the estimated cash flow available for distribution," Chief Executive Ron Wainshal said in a statement.

The company said the quarterly dividend was payable on April 15 to shareholders of record on March 31.

Aircastle also said it amended the terms of its revolving credit facility to extend the maturity date to Dec. 11 to provide continued sources of liquidity to the company.

Aircastle Limited is a company engaged in Commercial Aircraft Sales and Leasing.

It has its headquarters in Stamford, Connecticut, USA, with offices in Dublin and Singapore. Aircastle was established in early 2005 and now owns about 133 jet airliners, both narrow-body and wide-body types, which are leased to airlines around the world. The company acquires and leases commercial jet aircraft to passenger and cargo airlines.

Aircastle is owned by Fortress Investment Group LLC, a New York City private equity firm. Beginning on August 8, 2006, Aircastle has been traded on the New York Stock Exchange under the ticker symbol AYR.