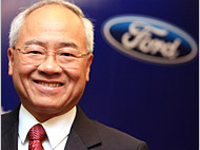 Robert Graziano, currently executive vice president for Mazda Motor Corp will take over for Cheng, who will also serve as executive chairman of Ford Motor China, the U.S. company said in a statement.

Philip Spender, a Ford veteran, has been appointed as executive vice president of Mazda.

Ford Motor Company is an American multinational corporation and the world's third largest automaker based on worldwide vehicle sales. Based in Dearborn, Michigan, a suburb of Detroit, the automaker was founded by Henry Ford and incorporated in June 16, 1903. Ford now encompasses many global brands, including Lincoln and Mercury of the US, Land Rover of the UK, and Volvo of Sweden. Ford also owns a one-third controlling interest in Mazda.