Mizuho puts off merging with Shinko

Mizuho Financial Group Inc. had to postpone a takeover creating Japan's third-biggest securities firm for the second time due to losses related to the U.S. mortgage crisis. 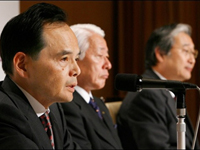 Mizuho puts off merging with Shinko

Mizuho, Japan's third-largest bank by market value, will delay merging investment-banking unit Mizuho Securities Co. with brokerage affiliate Shinko Securities Co. to next year from an earlier target of May 7.

Subprime-related losses prompted Mizuho in November to delay the acquisition, saying it needed to revise terms that valued Shinko at 765 billion yen ($7.7 billion). The Tokyo-based bank's securities arm reported 227 billion yen of losses related to U.S. home loans for the nine months ended Dec. 31 and forecasts a further 50 billion yen of such charges.

"Mizuho needs to cast aside uncertainty as soon as possible," said Keisuke Moriyama, a banking analyst at Nomura Holdings Inc. "What we'll watch is how Mizuho executives take responsibility for this second postponement and how the group can proceed with restructuring its securitization business."

Combining the two brokerage units would create a firm with 97 offices nationwide, more than 6,000 employees and combined revenue of 600 billon yen.

Shinko rose 0.6 percent to close at 313 yen on the Tokyo Stock Exchange, after falling as much as 9.7 percent in morning trading. Mizuho gained 4.7 percent to 404,000 yen, while the Topix Banks Index advanced 4.3 percent.

Mizuho said in December it would inject 150 billion yen into its own securities arm to cover losses from failed U.S. home loans. The company trimmed its profit forecast in January by 26 percent to 480 billion yen for the year ending March 31.

It holds assets in excess of $1.3 trillion US dollars through its control of Mizuho Bank, Mizuho Corporate Bank, and other subsidiaries. The company's combined holdings form the second largest financial services group in Japan, and the ninth largest in the world by market capitalisation. It is the 59th largest company in the world according to Forbes Global 2000 rankings. Its shares have a primary listing on the Tokyo Stock Exchange.