UAL Corp. to reduce its fleet due to surging fuel costs

UAL Corp, parent of United Airlines, will cut back its fleet by up to 4 percent this year to cope with the runaway cost of jet fuel, the chief executive of the No. 2 U.S. carrier said on Tuesday. 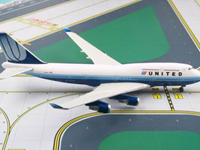 UAL Corp. to reduce its fleet due to surging fuel costs

UAL Corporation is an airline holding company, incorporated in Delaware with headquarters in Chicago, Illinois. The CEO of UAL Corporation since September of 2002 is Glenn Tilton.

In a message to employees, Glenn Tilton said the airline aims to eliminate 15 to 20 of its older, less fuel efficient narrow-body planes. United's fleet currently has 460 aircraft.

The airline industry has been battered by rising fuel costs, which are directly linked to the price of oil. A barrel of crude touched a record high on Monday of $111.80 CLc1.

"Continued uncertainty about the overall U.S. economy with the price of fuel at historically high levels has put significant pressure on all U.S. carriers," Tilton said.

United and other airlines have attempted to offset the fuel burden with fuel surcharges, fare hikes and charging for services that previously were including in the fare. But some experts say airlines may find it harder to pass the expense to travelers if a weaker economy erodes travel demand.

The fleet reduction is part of a broader effort to offset a possible $1 billion increase in fuel costs in 2008, UAL's Chief Financial Officer Jake Brace said in a statement earlier on Tuesday.

The airline currently has 20 percent of its anticipated 2008 fuel requirements hedged, Brace said. That's up from 16 percent as reported in previous regulatory filings.