Yahoo! Inc., the Internet company that turned down a $44.6 billion bid from Microsoft Corp., reaffirmed its first-quarter and 2008 forecasts and laid out its case for rejecting the software maker. 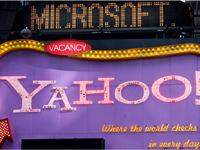 On February 1, 2008, Microsoft made an unsolicited bid to purchase Yahoo shares at the price of $31 per share, a bid valuing $44.6 billion for all the shares.

Cash flow may almost double in the next three years, and sales growth goals for 2009 and 2010 are higher than analysts estimate, Yahoo said in its most detailed argument since rejecting the deal more than a month ago. That potential deserves " significant acquisition premium,'' Yahoo said.

Yahoo pointed to operations in Asia, its No. 2 position in Web search and the potential cost savings of the deal to show it's worth more than $31 a share. Chief Executive Officer Jerry Yang has fought to persuade investors he made the right call as his stock trades at a widening discount to Microsoft's offer.

Yesterday Yahoo, based in Sunnyvale, California, traded at an 11 percent discount to the $28.96 per-share value of Microsoft's offer, which is in cash and stock.

Yang, one of Yahoo's co-founders, replaced Terry Semel last year after his company lost the lead in Internet advertising to rival Google Inc. He rejected Microsoft's bid on Feb. 11.

In January, Yahoo predicted first-quarter sales, excluding revenue passed on to partner sites, of up to $1.38 billion, and annual sales of as much as $5.95 billion.

After Yahoo's rejection, Redmond, Washington-based Microsoft said it reserves the right to take any steps necessary to get its offer in front of Yahoo shareholders.

Purchasing Yahoo would help Microsoft take second place in U.S. Internet searches, with about a third of total queries. Google, based in Mountain View, California, leads with about a 60 percent share, according to Reston, Virginia-based researcher ComScore Inc.