GameStop Corp reported the rise of its quarterly profit due to solid sales of games software, and said it plans to open up to 600 stores this year. 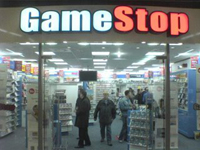 In addition to video and computer games, GameStop sells magazines, strategy guides, entertainment DVDs, and other related merchandise. A major source of the company's profit is also buying used games and movies from its customers and selling them back at an increase. A new store concept called MovieStop, which focuses on selling movies rather than games, is currently building and operating stores in the Southeastern United States, including the Dallas area.