Basilea Pharmaceutica AG, the Swiss biotechnology company working with Johnson & Johnson on anti-infective drugs, fell the most ever in Zurich trading after it failed to get U.S. approval for its ceftobiprole antibiotic. 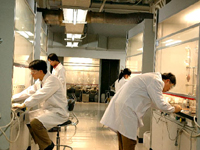 Basilea Pharmaceutica Ltd. is a Switzerland-based biopharmaceutical company that was formed as a spin-off entity from the drug giant Hoffmann–La Roche in October 2000. Basilea is engaged in the development of antibacterial and antifungal agents to combat drug resistance.

The Food and Drug Administration sent an "approvable letter'' saying it needs more information before it can allow sales of the treatment. The regulator wants to inspect study sites, get more information on the drug's use in diabetic foot infections and assess data already provided by the company.

Ceftobiprole, developed with a J&J unit, treats complicated skin infections, including the so- called superbug MRSA, or methicillin-resistant Staphylococcus aureus.

"There is a fair chance that 9 to 12 months from now we'll hear of approval from the FDA, but the big question is whether that will include diabetic foot infections,'' Andrew Weiss, an analyst at Bank Vontobel in Zurich, said in a telephone interview. Approval for this use would give the medicine an advantage over competing products, he said.

Basilea Chief Executive Officer Anthony Man declined to comment on a possible timeline for FDA approval in a conference call with analysts. The regulator hasn't requested additional studies, he said, and doesn't have concerns about side effects.

J&J agreed in 2005 to pay Basilea 370 million Swiss francs to jointly develop ceftobiprole, which is part of a group of antibiotics known as cephalosporins. The U.S. drugmaker bought rights to the treatment after Roche Holding AG decided not to develop the medicine.

Ceftobiprole has been submitted for approval in Europe, Canada and Switzerland in addition to the U.S. Basilea is also studying for use against pneumonia.

The Swiss company said in October ceftobiprole worked as well as current treatments in a study of patients who developed pneumonia while in hospital. J&J said the drug cured 86 percent of patients with diabetic foot infections in another trial.

Drug-resistant germs such as MRSA have emerged because of the over-use of standard treatments such as penicillin, oxacillin and amoxicillin, leading drugmakers to try to develop new antibiotics. MRSA alone affects about 2 million Americans annually and costs about $20 billion a year to treat, according to the U.S. Centers for Disease Control and Prevention.