A lawsuit was filed against Chiquita Brands International Inc by relatives of five U.S. missionaries killed in the 1990s by Colombian rebels. 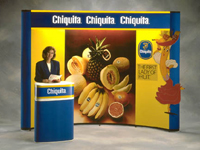 The lawsuit is the latest legal issue faced by the banana company that admitted paying off violent guerrilla groups in Colombia, where Chiquita's most profitable units operated.

The lawsuit claims the five missionaries were kidnapped by the Revolutionary Armed Forces of Colombia, also known as FARC, and were killed after the missionary group did not pay the ransom sought by FARC.

The lawsuit, which seeks unspecified damages, alleges that Chiquita's payments to the FARC were a contributing factor in the deaths of the missionaries because they financed the group's operations during that period.

Chiquita Brands International Inc. is a Cincinnati, Ohio-based producer and distributor of bananas and other produce, under a variety of subsidiary brand names, collectively known as Chiquita. Chiquita is the successor to the United Fruit Company and is the leading distributor of bananas in the United States. The company also owns a German produce distribution company, Atlanta AG, which it acquired in 2003.

The Revolutionary Armed Forces of Colombia  is a self-proclaimed Marxist-Leninist revolutionary guerrilla organization.

The FARC is considered a terrorist group by the Colombian government, the United States, Canada, the Latin American Parliament, and the European Union. Cuba and Venezuela instead refer to the leftist rebels as “insurgents”. Venezuelan President Hugo Chávez, for example, publicly rejected this classification in January of 2008 and called on Colombia and other world governments to recognize the guerrillas as a “belligerent force”, arguing that they would then be obliged to renounce kidnappings and terror acts in order to respect the Geneva Conventions.

The FARC-EP still claims to be a guerrilla movement. According to the Colombian government, FARC has estimated 6,000-8,000 members in 2008, down from 16,000 in 2001. Other available estimates are higher, including up to 18,000 guerrillas, with the FARC themselves claiming in a 2007 interview that they have not been weakened. The FARC-EP is present in 15-20 percent of Colombia’s territory, most strongly in southeastern jungles and in plains at the base of the Andes mountains.