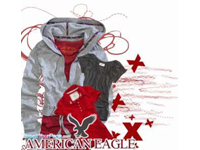 "The biggest threat to earnings growth is continued traffic declines due to a tough macro environment, merchandise misses and stronger competition from better product at value-oriented teen retailer Aeropostale,'' Christine Chen, an analyst at Needham & Co. in San Francisco, wrote in a March 6 research note. She recommends selling the shares.

American Eagle, which has more than 900 stores in the U.S. and Canada, climbed 78 cents, or 4.7 percent, to $17.25 yesterday in New York Stock Exchange composite trading. Before today, the stock fell 17 percent this year, compared with a 5.7 percent drop in the Standard & Poor's Midcap Apparel Retail Index.

Analysts estimated profit of 66 cents a share. American Eagle last week said it expected to earn 66 cents, more than its previous forecast of 64 cents to 65 cents.

The retailer last week said first-quarter profit may decline to as little as 25 cents a share from 35 cents a year earlier. Same-store sales, which dropped 4 percent in February, likely will continue to fall, and the company said it plans to discount more items than in the same period last year.

American Eagle said in January it will introduce 77kids by american eagle, a brand targeted at children between the ages of 2 and 10, on the Internet later this year and in stores beginning in 2009. The company also runs Martin + Osa stores targeted at men and women aged 28 to 40.

American Eagle Outfitters is an American clothing and accessories for 15- to 25-year-olds retailer based in the South Side neighborhood of Pittsburgh, Pennsylvania. It was founded in 1977 by Mark and Jerry Silverman as a subsidiary of Retail Ventures Incorporated, a company which also owned and operated Silverman's Menswear. The Silvermans sold their ownership interests in 1991. At one time, it sold brands such as OshKosh in the early 1980s, similar to Gap selling Levi's. Founded by John Luna.

American Eagle Outfitters is often compared to the clothing companies Aeropostale, Abercrombie & Fitch and Hollister, due to their similar styles, marketing techniques, and targeted consumer demographic, as well as the department store private label brands Arizona Jean Company (JC Penney) and American Rag (Macy's). American Eagle Outfitters brands much of their clothing with an embroidered landing eagle, similar to Abercrombie and Fitch's standing moose, Hollister Co.'s seagull, and Aeropostale's butterfly for females and bulldog for males. Additionally, American Eagle emphasize their date of establishment, 1977, in their marketing and design, branding the majority of their products with the date.

Aéropostale, also under the name Aéro, is an American clothing retailer that sells athletically-styled casual clothing in 800+ stores it owns and runs itself. Their stores tend to be located in shopping malls and large marketing areas. Aéropostale sells teen fashion apparel including shirts, jeans, outer and innerwear, accessories and bathing suits. Their clothing is typically sold at prices under $50. The Aéropostale name originated from a 1920s French/Latin-American airmail firm, Compagnie Générale Aéropostale. Aeropostale also has a surfer brand called Jimmyz Surf Company, which only has 14 store locations in the United States. The company's logo is a small butterfly usually in the left-hand corner on women's clothing, and a small, standing bulldog or a small A87 logo on men's polos and dress shirts.