Top state officials will urge House lawmakers on Wednesday to support their effort to change the way credit-rating agencies evaluate bonds given by state and local governments. 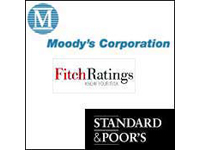 They argue that municipal governments have not suffered the same troubles as mortgage-related investments that were assigned the highest possible rating of "AAA" and have turned sour over the past year.

Most municipalities do not have pristine "AAA" ratings, so they go to bond insurers and pay to use their ratings, which lower the interest rates on bonds. But some critics argue that the insurance is often unnecessary, especially when the financial health of those bond insurers is in question.

"The current system is unfair," said a spokesman for Lockyer. "What we're asking for is a system that makes sense, a system that rates municipal bonds based on the rate of default, just as they rate corporations."

Bond insurers traditionally backed government bonds but in recent years expanded into the lucrative but risky area of complex mortgage-related investments. "Risky" has proven more accurate of a description than "lucrative" recently. Last week, troubled bond insurer Ambac Financial Group Inc. announced a plan to raise $1.5 billion, allowing it to stay in one piece after the company had considered splitting its operations.

A Moody's spokesman said the company has been discussing potential changes on its municipal rating system since 2006. In an e-mail, Anthony Mirenda said Moody's "is committed to continuing this ongoing constructive dialogue with the market."

The 10 a.m. House Financial Services Committee hearing is also scheduled to examine the overall impact of the credit crisis on municipal bonds, and whether states will have to scale back projects due to higher borrowing costs.

Among those scheduled to speak at the hearing, in addition to Lockyer, are: Erik R. Sirri, director of the Securities and Exchange Commission's division of trading and markets; New York Insurance Superintendent Eric Dinallo; Connecticut Attorney General Richard Blumenthal, the state treasurers for Pennsylvania and Mississippi and Ajit Jain, a top insurance executive with Berkshire Hathaway Inc.

Standard & Poor's is a division of McGraw-Hill that publishes financial research and analysis on stocks and bonds. It is one of the top three companies in this business, along with Moody's and Fitch Ratings.

Moody's long-term obligation ratings are opinions of the relative credit risk of fixed-income obligations with an original maturity of one year or more. They address the possibility that a financial obligation will not be honored as promised. Such ratings reflect both the likelihood of default and the probability of a financial loss suffered in the event of default.

Fitch Ratings, Ltd. is an international credit rating agency dual-headquartered in New York City and London. It was one of the three Nationally Recognized Statistical Rating Organizations designated by the U.S. Securities and Exchange Commission in 1975, together with Moody's and Standard & Poor's.

The firm was founded by John Knowles Fitch on December 24, 1913 in New York City as the Fitch Publishing Company.

A credit rating assesses the credit worthiness of an individual, corporation, or even a country. Credit ratings are calculated from financial history and current assets and liabilities. Typically, a credit rating tells a lender or investor the probability of the subject being able to pay back a loan. However, in recent years, credit ratings have also been used to adjust insurance premiums, determine employment eligibility, and establish the amount of a utility or leasing deposit.

A poor credit rating indicates a high risk of defaulting on a loan, and thus leads to high interest rates, or the refusal of a loan by the creditor.