News Corp. chairman and CEO Rupert Murdoch said he will not battle Microsoft Corp. to act as a white knight for Yahoo Inc. 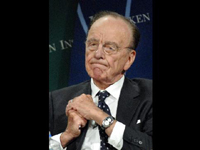 “We're not going to get into a fight with Microsoft, which has a lot more money than us,” said Murdoch at a conference. “'We're very happy to be in the Google camp,” he added later.

MySpace joined a software partnership in 2006 with Google Inc., the top search engine.

MySpace is a social networking website offering an interactive, user-submitted network of friends, personal profiles, blogs, groups, photos, music and videos for teenagers and adults internationally. Its headquarters are in Beverly Hills, California, USA, where it shares an office building with its immediate owner, Fox Interactive Media; which is owned by News Corporation, which has its headquarters in New York City.

Yahoo rejected a $44.6 billion takeover bid from Microsoft a month ago. New York-based News Corp. and Yahoo held talks about a combination to block the bid, a person familiar with the exchange said last month.

“He's been clear he doesn't want to buy Yahoo outright,'' said Marianne Wolk, an analyst at Susquehanna Financial Group in New York, who rates Yahoo shares “neutral'' and doesn't own any. “There's still a door open in terms of other potential types of deals.''

Microsoft said Feb. 11 it may pursue “all necessary steps'' to win over Yahoo shareholders, and a person with knowledge of the matter said last month that Redmond, Washington-based Microsoft may seek to oust Yahoo's directors.

Yahoo said last week it wants more time to explore options “without the distraction of a proxy contest.'' The nominating deadline, which had been March 14, will now be 10 days after Yahoo announces the date for its annual meeting, the company said. Yahoo also is in talks about a deal with Time Warner Inc.'s AOL unit, a person familiar with those discussions said.

Microsoft, trying to narrow Google Inc.'s lead in online advertising and Internet searches, disclosed the offer for Yahoo on Feb. 1. Yahoo's board has deliberated for the past month on how to counter Microsoft's bid, which it says "substantially undervalues'' the company.

Murdoch, who said he's become more pessimistic about the economy in the past month, said News Corp. is in “very good shape'' to face a weaker economy, as it reduced its dependence on advertising to 23 percent from 41 percent of revenue.