Kuehne & Nagel International AG reported fourth-quarter profit fell 15 percent as the company wrote down the value of its overland transportation operations in Europe. 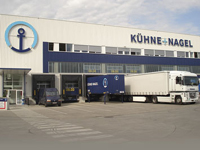 Kuehne & Nagel, which makes most operating profit arranging shipment of goods by sea and air, called the outlook for 2008 ``cautious.'' World trade volume growth will probably slow to 7.4 percent in 2008 from an estimated 8.7 percent last year, the World Bank said in January.

“While 2007 was characterized by a favorable global economy and strong global trade, forecasts for 2008 are cautious,'' Chairman Klaus-Mickael Kuehne said in the statement. "In view of these circumstances, we will intensify our efforts to improve internal processes and optimize cost management.''

Earnings before interest, taxes, depreciation and amortization rose 24 percent to 302.9 million francs. Sales increased 14 percent to 5.6 billion francs. The company proposed raising the 2007 dividend to 1.90 francs a share from 1.50 francs a year earlier.

Kuehne & Nagel added to its European overland transport operations with the purchase of two German competitors last November and said today it plans to expand the business further.

The Swiss company agreed in November to purchase German overland transport companies G.L. Kayser Spediteur, based in Mainz, and Cordes & Simon Group, based in Hagen, which have combined sales of 220 million euros ($338 million). The companies agreed at the time not to disclose purchase prices.

Kuehne & Nagel said it aims to "clearly outperform the market while maintaining stable margins'' this year in the sea- freight, air-cargo and contract logistics businesses.

The sea-freight unit recorded a 15 percent increase in volumes in 2007 compared with a year earlier. The amount of cargo arranged by the air-freight division rose 14 percent last year.

Kühne & Nagel is a German-founded transportation and logistics company based in Schindellegi, Switzerland. It is the world's largest non-vessel operating common carrier, and as such, has strong buying leverage with the major shipping lines of the world.

In the United Kingdom, the company regularly features in the top four in the IATA air freight forwarders league table.

August Kuehne and Friedrich Nagel founded the forwarding and commissioning business in 1890 in Bremen, Germany, concentrating on cotton and consolidated freight.