Thornburg Mortgage Inc. shares sank 51 percent on Thursday on worries the "jumbo" mortgage lender might go bankrupt, after its failure to meet a margin call triggered defaults under other lending agreements. 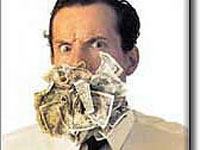 The decline followed Thornburg's disclosure in a late Wednesday filing with the U.S. Securities and Exchange Commission that it failed to meet a $28 million margin call from JPMorgan Chase & Co, and that the bank would exercise its rights under a $320 million loan.

Thornburg said the JPMorgan notification triggered defaults under its other reverse repurchase and secured loan agreements, and its obligations under those agreements were "material."

The Santa Fe, New Mexico-based company has suffered as the housing slump and tight credit led investors to shun securities they no longer consider safe. These include the higher-rated mortgages above $417,000, which Fannie Mae and Freddie Mac cannot buy and in which Thornburg specializes.

"With other lenders seizing assets, Thornburg would have limited access to liquidity and limited means to resolve other capital and funding needs,” an analyst says. “A bankruptcy filing is a more likely outcome." The analyst rates Thornburg "under perform," and halved his price target to $1 per share.

Jeffrey Gundlach, chief investment officer of TCW Group in Los Angeles , which invests $160 billion, said he has seen a list of more than $4 billion of non-agency assets that Thornburg wants to liquidate, and is bidding on some of them.

Half the assets were securities backed by "prime" mortgages, and half were backed by "Alt-A" mortgages, which often go to people with good credit but who lack full documentation of income or assets.

"It's a consortium of dealers that are all calling in their loans," Gundlach said.

On Monday, Thornburg said it had failed to meet a substantial majority of $270 million of new margin calls, after having met more than $300 million in February.

Thornburg shares closed at $11.54 on Feb 27, the last day before it began disclosing the series of margin calls.