National Public Radio's chief executive is stepping down, the network's board of directors announced Thursday. 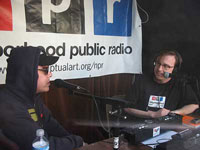 Ken Stern, who spent 10 years with the company as chief operating officer and chief executive officer, is leaving by "mutual agreement," the board said in a statement. Chairman Dennis L. Haarsager will serve as interim CEO while the board searches for a permanent replacement.

The board did not give a reason for Stern's departure.

"During his tenure, Ken was instrumental in improving NPR's financial health and for initiating important work extending NPR's reach to various new platforms including satellite and digital distribution," he said. "Under his watch, NPR News significantly increased the number of staff, foreign and domestic bureaus and areas of coverage."

Stern said in a statement that he was proud of NPR's journalistic and financial achievements during his tenure.

"I have enormous respect for the management team I assembled and know they will keep NPR on this successful path," he added.

National Public Radio is a semi-independent, privately and publicly funded non-profit membership media organization that serves as a national syndicator to public radio stations in the United States.

Its member stations are not required to broadcast all of these programs and most public radio stations broadcast programs from all three providers. Its flagship programs are two drive time news broadcasts, Morning Edition and the afternoon All Things Considered; both are carried by nearly all NPR member stations and in 2002 were the second-and third-most popular radio programs in the country. In a Harris poll conducted in 2005, NPR was voted the most trusted news source in the US.