British Airways Plc predicts the fall of its profit margin  in the coming fiscal year because of record fuel costs and a slowing economy. 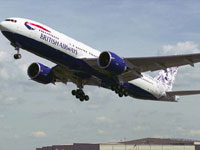 British Airways Plc is the largest airline and flag carrier of the United Kingdom and Europe's third- biggest airline. Its main hubs are London Heathrow and London Gatwick. British Airways holds a United Kingdom Civil Aviation Authority Type A Operating License, and is permitted to carry passengers, cargo and mail on aircraft with 20 or more seats.

The carrier declined as much as 5 percent in London trading and was down 4.2 percent at 11:23 a.m. British Airways' operating margin for the year ending March 31, 2009, will be about 7 percent, from a target this year of 10 percent, the London- based airline said today in a statement.

Chief Executive Officer Willie Walsh set the 10 percent margin as he slashes costs and prepares to attract more passengers once the 4.8 billion-pound ($9.6 billion) Terminal 5 opens this month at London Heathrow, Europe's busiest airport. The new facility will increase one-time costs in the next fiscal year.

Analysts are predicting an operating margin of about 7.2 percent for the next fiscal year. Today's profit-margin guidance was part of the airline's annual presentation to investors.

British Airways is a "business in transition,'' Walsh said today in the presentation. The airline needs to determine how it can grow in London, its biggest market, where flight growth is constrained by government regulation, Walsh said. The carrier also must create opportunities outside the U.K. capital.

Beyond BMI and Iberia, Walsh said he doesn't see much else of "strategic value'' in Europe, though he's "looking for opportunities'' in China and India, where air transport is booming. The airline's OpenSkies subsidiary due to start flying in June should also help it capture new business, he said.

The Open Skies treaty, which ends the lock British Airways and three other carriers had on flights to the U.S. from Heathrow, was the No. 1 concern of investors last year.

The treaty, which starts at the end of March, has "pretty much played out the way we expected,'' Walsh said today, with increases in capacity at Heathrow and fare reductions meeting the airline's predictions.

Carriers including Air France-KLM, Europe's biggest, and Delta Air Lines Inc. plan to start flights from Heathrow to the U.S. this spring, taking advantage of the accord between the European Union and the U.S. The OpenSkies subsidiary created by British Airways plans to offer service between Paris and New York starting in June.

Terminal 5 will open in three weeks, expanding annual capacity at Heathrow by 30 million passengers though it won't create additional flights. British Airways, the building's only occupant, plans to base about 90 percent of its Heathrow operations at the new terminal, moving services over the course of the next 11 months.

Walsh blamed delays and overcrowding at the airport for dissuading passengers when he cut a full-year sales target last August from about 5 percent to about 4 percent. British Airways is the biggest user of the London airport, with about 41 percent of takeoff and landing slots.

Terminal 5 should ultimately save the airline about 40 million pounds a year as it brings together operations now divided between terminals 1 and 4, and allows the carrier to trim the workforce.

Still, the move will generate about 35 million pounds of one-time costs this fiscal year with additional expenses "continuing'' into the next as BA must maintain a "multi- terminal environment'' and employ extra staff.

The company will also seek to reduce costs next year by negotiating better deals with U.S. cargo and customer service workers, and by shrinking its property portfolio. The company has slashed 1.9 billion pounds of non-fuel costs since 2001 by reducing the workforce and lowering pension payments.

The International Air Transport Association, which represents more than 200 carriers, forecasts that global airline profit will be dented by higher oil prices and slowing economic growth this year.

Crude oil, from which jet fuel is derived, traded at a record $105.77 a barrel at 12:02 p.m. London time on the New York Mercantile Exchange, or 74 percent higher than a year ago. Based on oil prices in 2002, British Airways would achieve a 27 percent operating margin this year.