Costco Wholesale Corp said on Wednesday its second quarter profit rose compared with a year earlier when it recorded charges for expensing stock options, with quarterly sales also up. 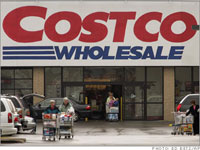 Costco Wholesale Corporation is the largest membership warehouse club chain in the world based on sales volume, headquartered in Issaquah, Washington, United States, with its flagship warehouse in nearby Seattle. Costco's Canadian operations are based in Ottawa, Ontario. It is the fourth biggest general retailer in the United States, after Wal-Mart, The Home Depot, and Kroger. The company's main rivals are Sam's Club, owned by Wal-Mart Stores Inc, and BJ's Wholesale Club Inc.

Customers pay an annual membership fee to shop in Costco's warehouse clubs, which sell everything from discounted flat-panel TVs and diamond rings, to bulk-sized packages of toilet paper and soda.

Costco focuses on selling products at low prices, often at very high volume. These goods are usually bulk-packaged and marketed primarily to large families and businesses. Furthermore, Costco does not carry multiple brands or varieties where the item is essentially the same except when it has a house brand to sell, typically under the Kirkland label. This results in high volume of sales from single vendor, allowing further reduction in price, and reducing marketing costs. Costco also saves money by not stocking extra bags or packing materials; to carry out their goods, customers must bring their own bags or use the merchandise shipping boxes from the company's outside vendors.

Warehouse clubs, like Costco, have been seen as a bright spot in the struggling U.S. retail sector as cash-strapped shoppers, worried about the weakening U.S. economy, have headed to the clubs in search of lower priced food and gasoline.