Deutsche Telekom AG will cut prices for Internet television and offer all-you-can-talk flat rates in Germany in a move to offset customer declines in its fixed-line unit. 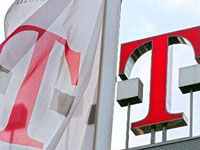 Starting in mid-April, prices for television provided via broadband Internet (IPTV) will drop by 17 percent, board member Timotheus Hoettges said on Monday at a press conference ahead of the CeBIT technology fair.

For fixed-line operators like Deutsche Telekom, IPTV is seen as a chance to compete against cable companies' all-in-one packages of video, telephony and Internet services as well as to keep and win back customers.

Deutsche Telekom was formed in 1996 as the former state-owned monopoly Deutsche Bundespost was privatized. As of 2005, the German government still holds a 15.7% stake in company stock directly, and another 14% through the government bank KfW. 4.5% of the company is owned by the Private equity firm Blackstone Group.