Japanese stocks fell the most in a month on concern fallout from the U.S. mortgage market crisis is spreading to Japan's consumer lenders and a U.S. recession will extend the dollar's decline against the yen. 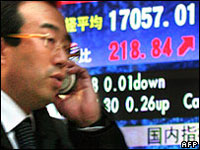 Takefuji Corp., Japan's third-largest consumer credit company by market value, slumped the most in three weeks after saying it may lose as much as 30 billion yen ($291 million) on derivatives transactions. Nintendo Co. fell as the yen rose to a three-year high.

Nintendo, which sells more than twice as many Wii game machines in the Americas as in Japan, lost 5.8 percent to 50,200 yen in Osaka trading. Komatsu Ltd., which gets 30 percent of its sales from North America, plunged 5.7 percent to 2,545 yen, the steepest decline since Feb. 6. Honda Motor Co., Japan's second- biggest automaker, slid 5.8 percent to 3,070 yen.

Nippon Steel, the world's second-biggest maker of the alloy, tumbled 6.8 percent to 522 yen, the lowest close since December 2006. The company may report a decline in pretax profit this financial year as costs of raw materials surged, the Nikkei newspaper said. Smaller rival JFE Holdings Inc. fell 8.7 percent to 4,330 yen, the biggest drop since Aug. 17.

The Topix Iron & Steel Index plummeted 7 percent and was the biggest decliner among the 33 industry groups included in the broad benchmark.

Nippon Telegraph & Telephone Corp., Japan's biggest telephone carrier, gained 3.3 percent to 469,000 yen, the sharpest advance since May 15, after Credit Suisse Group raised its rating to "outperform'' from "neutral.'' Operating profit at NTT's two regional units will rise for the first time in five years, the company said in a Feb. 29 business plan for the next fiscal year.