By Anastasia Tomazhenkova: Royal Bank of Scotland Group PLC posted that its full year net profit rose 18% as gains from the sale of non-key assets outweighed the impact of subprime-related asset writedowns, which the bank also raised further. 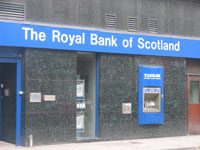 Revenue rose 11% to 31.1 billion pounds (61.8 billion dollars), boosted by gains from the sale of its stake in Southern Water Capital Ltd.

The higher charge is largely due to a 456 million pound (904 million dollars) writedown on its exposure to U.S. bond insurers after they suffered rating downgrades.

On a positive note, the bank raised its expected benefits from its purchase of the Dutch Bank to 2.3 billion euros (3.5 billion dollars) from 1.7 billion euros, due to higher cost and revenue benefits.

"We have secured a whole additional range of options for ourselves this year that will serve us well in 2008 and beyond," said Chief Executive Fred Goodwin. "We feel that we are well placed to deal with a broad range of market scenarios."

However, the mixed nature of the report was reflected in RBS's share price, which fluctuated between gains and losses after the announcement. The stock was up 0.4% at 411.5 pence (8.16 dollars) in midday trade.

Potter said the extent of the writedowns "appears reasonable in a sector context but clearly this is a highly subjective area."