By Anastasia Tomazhenkova: Omnicare Inc. posted that its fourth-quarter net profit fell to $20.8 million, or 17 cents per share, compared with net income of 69.7 million dollars, or 58 cents per share, in the year-earlier quarter, as the company recorded a 94 million dollars pretax provision for "doubtful accounts" in light of recent customer bankruptcies, changes in Medicare reimbursements and "other legal action." 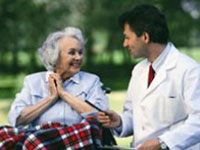 Results included 14 cents in various charges, including a "provision for doubtful accounts," compared with 25 cents in charges a year earlier.

The company had expected per-share earnings, excluding items, of 45 cents to 50 cents.

The mean earnings estimate of analysts polled by Thomson Financial was 46 cents per share on revenue of 1.56 billion dollars.

"Our results for the year reflect the challenges we have faced over the last 24 months with the convergence of Medicare Part D, and its ongoing evolution, with the burgeoning shift toward generic drugs and the complexities this has brought to our business," said Chief Executive Joel Gemunder.

The company recently came under federal scrutiny for allegedly attempting to steer senior clients to its Medicare prescription drug plans.

Edward Hutton, who had been chairman since 1981, retired to become "chairman emeritus." The company is searching for a replacement.