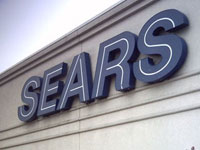 The performance was in line with Wall Street forecasts after the ailing company warned last month that eroding sales might push its profit down as much as 57%.

Excluding a one-time gain from the sale of some assets, Sears said it earned 3.04 dollars during the quarter.

"Given the challenging retail environment, we will work to improve and tighten management of costs and inventory levels in 2008," said W. Bruce Johnson, Sears Holdings' interim CEO and president.

Johnson, who took the helm of the company this month after president and chief executive Aylwin B. Lewis abruptly stepped down, also blamed the souring economy for the once-venerable retailer's trouble.

"Our fourth quarter and full year results continued to be negatively impacted by the worsening economic conditions faced by both our customers and competitors, as well as increased markdowns taken to clear excess inventory," he said in a statement.

Sears said it had about 1.6 billion dollars in cash on hand - far less than the 3.8 billion dollars the company had last year - as it continued to pour tens of millions into buying back stock.

Many investors have regarded Sears as a hedge fund masquerading as a retailer under Lampert, who acquired Kmart in 2003 and Sears, Roebuck and Co. in 2005. The company invests in foreign currency contracts as well as complex credit derivatives that are popular among hedge funds.

Investor confidence has appeared to melt away in recent weeks as Lampert's prospects of fixing Sears become more daunting.

In a note to investors Thursday, Lampert sought to silence critics as he defended his decision to buy back shares rather remodel stores that are showing their age.

"We know what it's like to be underestimated and questioned, but we intend to keep working on our game to achieve our full potential," he wrote.