By Anastasia Tomazhenkova: An online DVD rental pioneer Netflix Inc raised its quarterly and full-year forecasts for subscriber growth, earnings and revenue, sending its share up 10%. 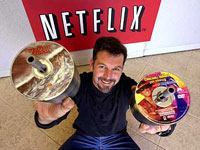 Los Gatos, Calif.-based Netflix was up 2.93 dollars, or more than 10%, to 31.94 dollars in morning trading. The company now says it expects first-quarter earnings of 15 cents to 22 cents per share, up from its earlier forecast of 13 cents to 21 cents.

Jim Friedland, analyst at Cowen & Co., believes the increase in Netflix's outlook reflects the fact that DVD rental rival Blockbuster Inc. has pulled back marketing spending on its Total Access subscription service. The most popular Total Access plan allows customers to take out three DVDs by mail and get five free exchanges in a Blockbuster store for 19.99 dollars a month.

Netflix has a library that carries more than 90,000 titles. Netflix also offers downloads, giving customers the ability to watch more than 6,000 movie and TV titles on their PCs. It recently gave its traditional subscribers the ability to get unlimited downloads for no additional fee.

The company expects full-year earnings per share of 1.18 dollar to 1.30 dollar, compared with an earlier view of 1.12 dollar to 1.24 dollar.

It said that the earnings guidance increase reflects the completion of its 100 million dollars stock repurchase program, which involved the repurchase of 3.8 million shares in a buyback program announced earlier this year.

Blockbuster shares were up 2 cents at 3.20 dollars on the New York Stock Exchange. Movie Gallery filed for Chapter 11 bankruptcy protection in October. It has said it expects to emerge from Chapter 11 in the second quarter.