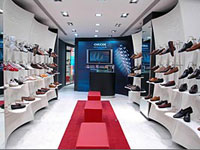 By Anastasia Tomazhenkova: Shoe retailer Geox SpA posted that its net income rose 26% from a year earlier, reflecting strong sales as it continued to roll out its network of stores across Europe, the United States and Asia.

The company's board also approved a dividend payout of 0.24 euro (0.36 dollar) a share.

Looking ahead, the company said it expects an annual sales growth of 20% over the next three years. The company added it aims to reach 1,500 Geox shops in 2010.