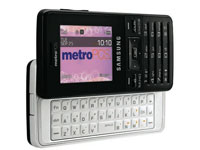 The number of shares outstanding for the latest quarter more than doubled.

In addition, the latest quarter includes a charge of 83 million dollars for unrealized losses related to the investment in auction rate securities. Excluding the item, earnings were 10 cents per share.

The company also said its average revenue per user fell 61 cents to 42.54 dollars, mainly related to higher participation in its family plans.

Service revenue for the quarter rose 36% to 511 million dollars, with the company adding 299,000 net subscribers in the period.

MetroPCS reaffirmed its outlook of 1.25 million to 1.52 million for net subscriber additions in 2008.