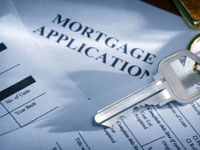 It marked the third straight week of a decline in the index, pushing home loan demand down to the lowest level in 2008.

The MBA's seasonally adjusted index of refinancing applications plunged 30.4 percent to 2,458.9 last week, its lowest since December. The decline came as the average 30-year fixed mortgage rate climbed to 6.27 percent from 6.09 percent in the previous week.

The 30-year rate has risen 0.78 percentage point since mid-January amid concerns short-term interest rate cuts by the Federal Reserve will spark faster inflation.

Mortgage applications appropriated for home purchases were little changed, with the MBA's seasonally adjusted purchase index edging up 0.2 percent to 358.2, the association said.

Refinancing applications tumbled to 52 percent of the total from 61.7 percent in the previous week, it said.