Henkel KGaA, an international household products company headquartered in Düsseldorf, Germany, posted an 11 percent increase in fourth-quarter profit after selling more adhesives and said it will curtail as many as 3,000 jobs to further cut costs. 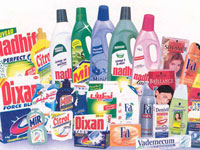 With presence in 125 countries on five continents, Henkel engages in the majority of their business within Europe and North America .

Henkel didn't say when it starts the job cuts, which represent about 7 percent of its 53,000 workforce. The company, which increased its annual sales and operating profit forecast three times last year, has reduced costs after merging its industrial and consumer adhesives units in 2007.

"With this step we are responding early and responsibly to the ever faster changes in our markets,'' Chief Executive Officer Ulrich Lehner said in the statement.

Henkel also said today it plans to sell all or part of its 29.4 percent stake in U.S. cleaning-chemicals maker Ecolab Inc. as falling home sales curb growth in the world's biggest economy. The German company, which hasn't decided on the timing of a sale, values the holding at about $3.72 billion.

Henkel intends to spend 500 million euros this year on the job cutting program as well as on other cost-reduction measures aimed at generating annual savings of 150 million euros from 2011.

Before today, the preferred shares had fallen about 20 percent in 2008, valuing the company at about 12.8 billion euros.

Operating profit as a percentage of sales for the whole company was unchanged at 10.1 percent.

Henkel expects growth of 3 percent to 4 percent in revenue and a stronger percentage increase in earnings before interest and taxes this year after adjusting for currency swings.

Operating profit at the beauty unit declined 3 percent to 97 million euros, while the home-care unit increased earnings on that basis by 2.4 percent to 105 million euros.