Consumer confidence fell to a five-year low in February and expectations tumbled to a 17-year trough in a tightening jobs market, a new survey showed, fueling fears the economy was already in recession. 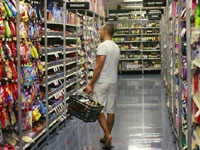 The New York-based Conference Board says in a report released on Tuesday that its Consumer Confidence Index plunged in February to 75.0 from a revised 87.3 in January.

It was the biggest monthly drop in the consumer confidence and expectations indexes since September 2005, following Hurricane Katrina. The present situation index saw its biggest tumble since October 2001, the last time the United States was in recession.

Financial markets reacted to the grim tone of the data. Stocks .DJI extended their losses and the dollar weakened versus the Japanese yen.

Thus the index measures how consumers feel now about the economy. It has been weakening since July, suggesting that wary consumers may retrench financially, which could fatigue the economy further.