Target reports its profit fell in the fiscal fourth quarter, as sales slowed in the second half of the year overall. 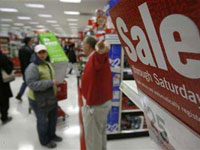 Target Corporation is an American retailing company that was founded in Minneapolis , Minnesota , in 1902. In 1962, the first Target store was opened in Roseville , Minnesota . It is the fifth largest retailer by sales revenue in the United States behind Wal-Mart, The Home Depot, Kroger and Costco. The company is ranked 33rd on the 2007 Fortune 500. Target operates its retailing business exclusively in the United States . It is a rival and competitor of Kmart and Wal-Mart.

Target was listed in Internet Retailer's list of the top 500 retail web sites in 2007.

Revenue edged up nearly 1 percent to $19.87 billion, from $19.71 billion last year. Analysts expected revenue of $20 billion. Results were helped by new-store expansion and revenue from credit card operations. Sales in stores open at least one year, known as same-store sales, edged up 0.2 percent.

The company says the pace of sales and earnings dicreased greatly in the second half of the year.