The European currency advanced against the dollar on Tuesday after a key survey revealed a surprise jump in business confidence in Germany , the biggest economy in the Euro zone. 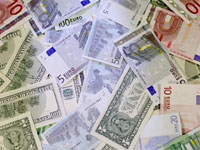 A survey showed on Tuesday that German companies were upbeat about the current climate but were worried by the outlook, as data confirmed that economic growth in Germany slowed in the fourth quarter.

An index of how managers assess the current business climate compiled by Germany 's Ifo institute rose in February for the second month running to 104.1 from 103.4 points in January -- beating market forecasts of a fall to 102.7.

"It is good news from the German economy this morning, with the February Ifo survey climbing to a better than expected +104.1," said CIBC economist Audrey Childe-Freeman on Tuesday.

The Ifo report was "supportive for the euro and the stock market," Childe-Freeman added.

But the survey of 7,000 German firms also showed increased worries about future business conditions, with the expectations index slipping to 98.2 from 99.0 in January, Munich-based Ifo said in a statement.

The foreign exchange market was also focusing on the release of US producer price data later on Tuesday and testimony by the head of the US Federal Reserve Ben Bernanke to the Senate Banking Committee on the Fed's semi-annual monetary report on Wednesday.

Investors are also waiting for the release this week of new residential home sales on Wednesday and consumer spending on Friday.

Dealers want to see whether the Fed will continue to focus more on slowing economic growth than on simmering inflation.

Most analysts expect the Fed to cut a half-point off its base federal funds rate at its March 18 meeting, extending a series of cuts aimed at warding off a recession in the world's biggest economy.

The dollar was buoyed Monday by a Wall Street rally that was sparked by relief that ratings agency Standard & Poor's had maintained AAA credit ratings for two major US bond insurers, dealers said.