Producer prices jumped 1 % in January on growing energy costs and stated the biggest 12-month gain in more than 26 years. 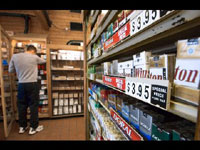 Analysts were expecting prices paid at the farm and factory gate to rise 0.4 % overall and 0.2 % when food and energy were stripped out.

Producer prices were up 7.4 % from January of last year, the sharpest increase since October 1981.

The dollar gained against the euro and New York gold futures narrowed losses on the larger-than-expected price rises, which could make it harder for the Federal Reserve to cut benchmark interest rates to prop up the underperforming U.S. economy.

U.S. fed funds rate futures fell after the report, as did stock futures.