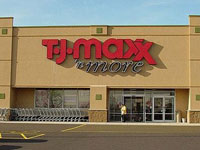 The operator of about 2,500 stores including T.J. Maxx and Marshalls also said it has reduced a legal reserve because of lower-than-expected costs so far from a massive data breach disclosed a year ago.

Not counting a gain of 11 million dollars, or 2 cents a share, from reducing its breach-related legal reserve, TJX's profit was 64 cents per share. That beat by a penny per share the estimate from analysts polled by Thomson Financial.

TJX said it enjoyed higher fourth-quarter profits because of disciplined management of its inventory, as well as cost controls.

TJX said it recorded the gain from reducing its breach-related legal reserve because of insurance proceeds it has received to help cover breach costs, and because of a reduction in estimated legal and other fees after TJX recently resolved some disputes and litigation. However, some litigation and government investigations remain pending.

After initially disclosing the data heist in January 2007, TJX said last March that at least 45.7 million cards were exposed to possible fraud in a breach of its computer systems that began in July 2005. Recent court filings by some banks that sued TJX put the number of cards affected at more than 100 million, based on estimates by officials with Visa and MasterCard, who were deposed in the lawsuit.

In last year's second quarter, TJX's profit was cut by more than a half from a 118 million dollars breach charge, mostly to build up a reserve covering future expenses.

Excluding one-time gains and expenses, TJX said it expects to post an income of 40 cents to 41 cents a share in this year's first quarter, up 18% to 21% from a year ago.

Analysts are expecting a slightly higher profit of 42 cents a share.

TJX expects first-quarter sales at stores open at least a year to increase 4% to 5%, with nearly half the gain coming from favorable foreign currency exchange rates.