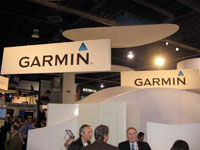 Company's earnings for the three months ended December 29 rose to 307.3 million dollars, or 1.39 dollar a share, compared with 180.3 million dollars, or 82 cents a share, during a corresponding period a year earlier. Excluding favorable exchange rates, Garmin said its profit rose to 1.31 dollar from 87 cents a year ago.

"The strong holiday season demand we experienced clearly demonstrated that our products are well-positioned to take advantage of the growing interest in portable navigation devices," Chairman and Chief Executive Min Kao said in a statement.

Garmin said the quarterly and annual figures were the company's best ever, with strong sales growth in each of the company's operating regions.

The company predicted it will beat analysts' earnings and sales forecasts again this year.