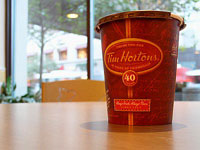 The company also raised its quarterly dividend by 28.6 %.

The mean analyst estimate was for a profit of 40 Canadian cents a share before exceptions.

The company planned to increase its dividend payable March 17 to 9 Canadian cents a share.

The coffee and doughnut chain is trying to gain acceptance in the big U.S. market, where it meets tough competition from such long-standing rivals as Dunkin' Donuts.

Tim Hortons said its cost of sales in the quarter rose 13.6 %, partly a reflection of higher distribution costs.

Named after the National Hockey League player who co-founded the restaurant chain, the company opened 119 new restaurants in the quarter, more than the 111 it opened in the same period in 2006.