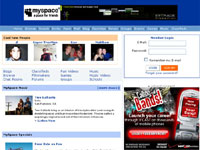 MySpace has approached the four top music labels with plans for the service according to stories in the Wall Street Journal, Financial Times and technology Web site CNET.com.

The News Corp owned company has allegedly been in discussion with Universal Music, Sony BMG, Warner Music and EMI whose artists include Kylie and Coldplay, however all are yet to comment on the matter .

MySpace is a social networking website offering an interactive, user-submitted network of friends, personal profiles, blogs, groups, photos, music and videos internationally. Its headquarters are in Beverly Hills , California , USA , where it shares an office building with its immediate owner, Fox Interactive Media; which is owned by News Corporation, which has its headquarters in New York City .

MySpace profiles for musicians are different from normal profiles in that artists are allowed to upload up to six MP3 songs. The uploader must have rights to use the songs. Unsigned musicians can use MySpace to post and sell music, which has proven popular among MySpace users. MySpace music has been around since its debut in Fall 1998 and the first original artists to sign up to MySpace occurred in December 1998.