U.K. stocks declined for the first time in three days, led by banks, after Alliance & Leicester Plc stated a slump in second-half profit and curtailed its growth target for this year and next. 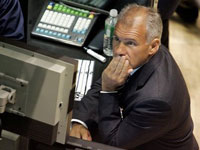 Alliance & Leicester, the second-worst performing U.K. bank in the past month, tumbled 16 % to 443 pence, the steepest drop since September. The lender said its previous target for earnings-per-share growth through 2009 of at least 9 % above inflation ``is no longer appropriate'' because of a surge in funding costs and a slowdown in mortgage lending. Second-half profit fell 67 % to 73.1 million pounds ($142 million), or 17.4 pence a share.

Kingfisher lost 2.7 % to 133 pence after the shares were downgraded to ``underweight'' from ``neutral'' at JPMorgan.

``We expect the macro environment in the U.K. to deteriorate significantly and consumption in most European markets to slow,'' analysts including London-based Simon Irwin wrote in a report to clients today.