Chrysler does not announce number of workers taking buyout offers

By Anastasia Tomazhenkova: An American automobile manufacturer, Chrysler LLC will not announce the number of workers taking its latest buyout offers for several more weeks despite the passing of a deadline for thousands of Detroit-area workers to make a decision. 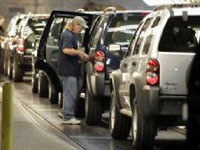 Chrysler does not announce number of workers taking buyout offers

Hourly workers at 11 of Chrysler's U.S. facilities had been scheduled to decide on the offers, which include a 70,000 dollars incentive payment to retirement-eligible workers or 100,000 dollars to workers who agree to leave without future pension or health benefits.

Toledo North in Toledo, Ohio; St. Louis North and South in Fenton, Missouri; Belvidere, Illinois; and Jefferson North in Detroit  had a January deadline to make decisions, while seven additional plants in Michigan had a Monday deadline.

The workers at other plants are still considering the buyouts. Workers at five plants in Indiana and Wisconsin have until February 25 to make a decision, while workers at an assembly plant in Newark, Delaware, which is scheduled to close next year, have until March 10. Buyout deals are still being negotiated for Chrysler's Mopar parts unit.

Chrysler, which is in the midst of a restructuring after a majority stake in the automaker was sold last summer to private equity firm Cerberus Capital Management LP, announced in November it planned to cut up to 12,000 jobs, including 8,000 to 10,000 hourly and 2,000 salaried jobs.

The cuts came in addition to 13,000 layoffs Chrysler announced in February 2007, including 11,000 hourly and 2,000 salaried workers. About 6,400 hourly workers had left the company under than program as of June, but additional retirement packages could still be rolled out under than program, which was scheduled to run through 2009.