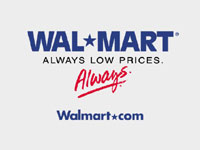 Full-year earnings will be at most $3.43 a share, less than analysts' projections, the retailer said. Wal-Mart rose less than 1 % in early New York trading.

Fourth-quarter sales at stores open at least a year rose 1.7 %, thus it outgoes Target Corp. for the first time in 3 1/2 years. Wal-Mart drew customers with an expanded consumer electronics section and more discounts on groceries after previously shifting too far into more-fashionable clothing.

Excluding costs including a write-down at its Japan unit, Wal-Mart earned $1.04 a share.

Consumers have reduced expenses on extras as they find themselves spending more for food, fuel and housing. Before the holiday season, Wal-Mart made price cuts earlier and on 20 % more items. Last month, the retailer introduced its own ``economic stimulus'' package, marking down groceries, medicines, fitness equipment and electronics as much as 30 %.

While Wal-Mart has suffered from a slowing U.S. economy because many of its customers live paycheck to paycheck, the retailer has also gained because of the proportion of basic goods it sells and its appeal as a destination for cost-conscious shoppers.

At the same time Wall-Mart gains from the slowdown of U.S. economy as it helped get some market share back from Target.

Wal-Mart Stores, Inc. is an American public corporation that runs a chain of large, discount department stores. It is the world's largest public corporation by revenue, according to the 2007 Fortune Global 500. Founded by Sam Walton in 1962, it was incorporated on October 31, 1969 , and listed on the New York Stock Exchange in 1972. It is the largest private employer in the world and the fourth largest utility or commercial employer, trailing the Chinese army, the British National Health Service, and the Indian Railways. Wal-Mart is the largest grocery retailer in the United States , with an estimated 20% of the retail grocery and consumables business, as well as the largest toy seller in the U.S. , with an estimated 22% share of the toy market.