Sprint Nextel and Samsung take care of their customers

Sprint Nextel and Samsung on Monday showed a new smartphone that operates on both Sprint’s network in the U.S. and on competitors’ networks when overseas. 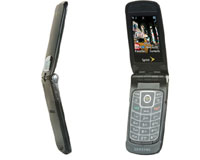 Sprint Nextel and Samsung take care of their customers

The quad-band Samsung Ace, which retails for $450 but costs $200 after rebates, uses the Microsoft Windows Mobile 6 operating system and is similar in style to the Samsung Blackjack.

The phone connects to Sprint’s high-speed wireless network, has a small traditional keyboard and weighs 4 ounces.

Thanks to the quad-band feature Sprint customers, traveling to other countries, can use their phones on GSM or GPRS networks.

Danny Bowman, Sprint’s vice president of customer equipment, is sure that the Samsung Ace combined with the benefits of SprintSpeed, competitive rates and expansive coverage through multiple technologies makes it one of the strongest Windows Mobile devices on the market today.

The new model can be used for voice service in about 180 countries and data service in 100 countries. Users can pay fees on networks where Sprint has roaming agreements, or purchase a SIM from another carrier.

The Ace has a 2.4-inch screen, a camera, a memory card slot and access to traditional Windows Mobile applications.

Sprint Nextel Corporation is one of the largest telecommunications companies in the US . With 53.8 million subscribers, Sprint Nextel operates the third largest wireless telecommunications network in the United States (based on total wireless customers), behind AT&T and Verizon Wireless. Sprint is a global Tier 1 Internet carrier, and, as such, makes up a portion of the Internet backbone. In the United States , the company also operates the second largest wireless broadband network and is the third largest long distance provider.