Motorola Inc. and Research In Motion Ltd. sue each other

Research In Motion Limited (RIM) (TSX: RIM, NASDAQ: RIMM) and Motorola Inc. (NYSE: MOT) filed a suit against each other. The apple of distort between a Canadian wireless device company and an American multinational communications company is mobile-phone patent infringement. 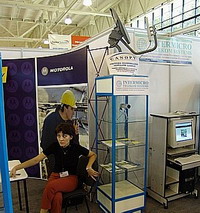 Motorola Inc. and Research In Motion Ltd. sue each other

Both companies claim that their competitor is using the technology without permission. The Motorola targets RIM's 8100, 8130, 8320, 8800, 8820 and 8830 model devices, as well as BlackBerry Exchange Server software. RIM in its turn accuses Motorola of infringing Research In Motion patents, including one for a device with a keyboard optimized for use with the thumbs.

In 2002, Research in Motion was sued for patent infringement by NTP in the United States District Court for the Eastern District of Virginia. During their defense, RIM attempted to show that NTP's patents were invalid as wireless email technology existed at the time NTP filed their patent applications. To illustrate its claim, RIM performed a demonstration to the court. Certain elements of that demonstration were established to be from after the priority dates of the patents in question and so the demonstration was not considered by the jury. The patents were found valid and willfully infringed and damages were assessed at $US 23 million. RIM appealed against the finding that the infringement was willful, but were unsuccessful (a finding of willful infringement can lead to higher damages than mere infringement).

During the appeals, RIM discovered new prior art that raised a "substantial new question of patentability" and filed for a reexamination of the patents of the NTP patents in the United States Patent and Trademark Office. That reexamination is conducted separately to the court cases for infringement. In February 2006, the USPTO rejected all of NTP's claims in three disputed patents. NTP has appealed the decision, and the reexamination process is still outgoing as of July 2006.

On 3 March 2006 , RIM announced that it had settled its BlackBerry patent dispute with NTP. Under the terms of the settlement, RIM has agreed to pay NTP US$612.5 million in a “full and final settlement of all claims.” In a statement, RIM said that “all terms of the agreement have been finalized and the litigation against RIM has been dismissed by a court order this afternoon. The agreement eliminates the need for any further court proceedings or decisions relating to damages or injunctive relief.”