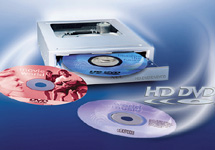 The move would follow Warner Bros.' decision in January to support Sony Corp.'s competing format, Blu-ray, which fueled sales of the product.

Blu-ray Disc is a high-density optical disc format for the storage of digital information, including high-definition video. The name Blu-ray Disc is derived from the blue-violet laser used to read and write this type of disc. Because of its shorter wavelength (405 nm), substantially more data can be stored on a Blu-ray Disc than on the DVD format, which uses a red (650 nm) laser. A Blu-ray Disc can store 50 GB, almost six times the capacity of a DVD.

Should Toshiba exit the business, companies supporting its HD DVD format — including General Electric Co.'s Universal Pictures and Viacom Inc.'s Paramount Pictures — would be released from their contracts.

Warner Bros. Entertainment, Inc. is one of the world's largest producers of film and television entertainment.

Founded in 1918 by Polish immigrants, Warner Bros. is the third-oldest American movie studio in continuous operation, after Paramount Pictures, founded in 1912 as Famous Players, and Universal Studios, also founded in 1912.

Sony Corporation is a Japanese multinational conglomerate corporation and one of the world's largest media conglomerates with revenue of $70.303 billion (as of 2007) based in Minato, Tokyo . Sony is one of the leading manufacturers of electronics, video, communications, video game consoles and information technology products for the consumer and professional markets, which developed the company into one of the world's richest companies.