German stocks rose, led by Deutsche Postbank AG after a report said Commerzbank AG is the government's partner of choice for a merger with the country's biggest consumer bank by clients. 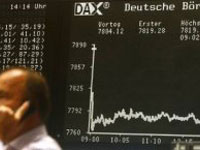 Deutsche Boerse AG, operator of the Frankfurt Exchange, gained after Borse Dubai Ltd., the biggest shareholder in rival London Stock Exchange Group Plc, agreed to buy Qatar 's stake in OMX AB and would consider an offer from its Gulf neighbor to sell shares in the London bourse.

Commerzbank Chief Executive Officer Klaus-Peter Mueller and his successor, Martin Blessing, have been in discussions with German Chancellor Angela Merkel over a combination with the country's largest consumer bank by clients for several months. No comments were given.

Bank stocks gained across the region after Qatar said it is accumulating shares in Credit Suisse Group and investors speculated two U.K. banks may boost their dividends.

State-owned Borse Dubai, which with Nasdaq Stock Market Inc. intends to buy Nordic exchange company OMX, would consider an offer from the Qatar Investment Authority for its stake in LSE though it hasn't been asked to sell.

The following stocks also rose or fell in German markets. Symbols are in parentheses.

Merck KgaA (MRK GY) fell 2 EUR, or 2.4%, to 82.54 EUR. The world's biggest maker of liquid crystals reported profit that missed analyst estimates as sales of the chemicals for flat-panel screens declined and the company had unexpected charges at its drugs unit.

SAP AG (SAP GY) added 39 cents, or 1.2 %, to 32.86 EUR. The world's largest business-management software maker plans to maintain sales growth in Saudi Arabia at similar pace as in countries such as China and India .

Singulus Technologies AG (SNG GY), the maker of machines that replicate compact discs and DVDs, gained 60 cents, or 6.1%, to 10.45 EUR after a report said Toshiba Corp. may abandon its HD DVD business after losing customers to Sony Corp.'s Blu-ray technology, a move that would end the media industry's biggest format war since the 1980s.