JP Morgan offered a target price of 51 hkd to Bank of East Asia (BEA) after the lender's 2007 results. 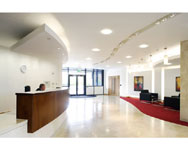 The earnings were near JP Morgan's forecast of 4.2 bln hkd and at the high end of analysts' forecast range of 3.8-4.2 bln hkd.

The bank recorded 1.229 bln hkd profit before tax from its China operations, up 72 pct from the previous year.

The brokerage noted that one-off gains were also larger than they were expected, which helped the bank offset a write down of 1.1 bln hkd on collateralized debt obligations (CDOs) and 270 mln hkd on special investment vehicles (SIVs).

The company expects the street to revise up slightly 2008 earnings due to better than it was expected results. It raises its 2008-09 EPS by 1.3 pct and 4.2 pct due to higher non-recurrent income offsetting lower fees income.

It added that it assumed a further 10 pct markdown on CDOs in 2008.