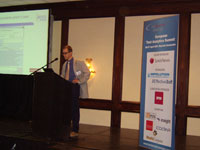 Merck KGaA is a German-based chemical and pharmaceutical company. It was founded in Darmstadt , Germany , in 1668 and is one of the oldest still-operating chemical companies in the world. The company was privately owned until going public in 1995. However, the Merck family still controls a majority of the company's shares.

Family-controlled Merck, which also makes the Erbitux cancer drug, sold its generic-drug unit for 4.9 billion EUR to Mylan Inc. to help pay for last year's acquisition of Serono SA. The company is building up branded medicines to reduce the reliance on liquid crystals. Merck controls 70 % share of the liquid crystals market, said profitability at that unit will fall this year.

Erbitux, known also as Cetuximab, is a chimeric monoclonal antibody, an epidermal growth factor receptor inhibitor, given by intravenous injection for treatment of metastatic colorectal cancer and head and neck cancer. Cetuximab was discovered by ImClone Systems and is distributed in North America by ImClone and Bristol-Myers Squibb.

Sales of Erbitux rose 33 % to 127 million EUR, and the multiple sclerosis drug Rebif garnered 317 million EUR in the quarter.

Merck plans to increase its dividend payout for 2007 to 1.20 EUR a share as well as hand shareholders a bonus of 2 EUR a share from the asset sale gain.

Merck has fallen 21 % in Frankfurt trading since a record last June on concern that Asian competitors are increasing production of liquid crystals. The German company increases production.

Sales at Merck's drug unit more than doubled to 1.26 billion EUR from October to December, while revenue at the Serono division rose to 1.15 billion from 493 million a year earlier.

Since buying Serono, Merck has focused its drug research on cancer, diseases of the nervous system, inflammatory illnesses and fertility. The company aims to market Erbitux, now used in head and neck as well as bowel cancers, to treat lung, breast and gastric tumors.