Disney wants to be part of India’s Entertainment Industry 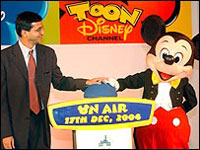 Disney wants to be part of India’s Entertainment Industry

The Walt Disney Company is the third largest media and entertainment corporation in the world, second is Time Warner and first is News Corporation. Founded on October 16, 1923 by brothers Walt and Roy Disney as a small animation studio, it has become one of the biggest Hollywood studios, and owner of eleven theme parks and several television networks.Disney's corporate headquarters and primary production facilities are located in California at the Walt Disney Studios (Burbank).

UTV Software Communications Ltd. is an Indian Media and Entertainment Company. UTV's interests include Motion Pictures, Broadcasting, TV Content and Interactive (Animation and Gaming). It is listed on the Mumbai Stock Exchange along with the Motion Pictures business being listed on the AIM, London Stock Exchange. The Walt Disney Company had acquired 14.85 per cent in UTV at Rs 200 per share in August 2006. Ronnie Screwvala and associates currently control 30.67 per cent in UTV. Through its 100% subsidiary, UTV Communications has acquired a controlling stake (62.42%) in Indiagames from Tom Online Games. UTV had sold Hungama TV, its maiden foray into broadcasting, to Walt Disney for $30.5 million in 2006. In September Prime Focus took over UTV's post production facility, which was valued at $ 3 - 4 million.

Walt Disney's purchase of the new shares will increase its holding in UTV Software to 32.1 percent from 14.9 percent, triggering a mandatory offer to buy at least a 20 percent stake from minority shareholders.

A controlling stake will give Disney entry into India 's entertainment industry, which is dominated by films and television. Among other movies, UTV co-produced ``The Namesake,'' directed by Mira Nair, last year and the just- released ``Jodhaa Akbar,'' a Hindi-language historical film.

If the offer is fully subscribed, Disney's stake in UTV Software will go up to 51.6 percent.

The offer, open from April 11 to April 30, is being managed by Goldman Sachs Group Inc.