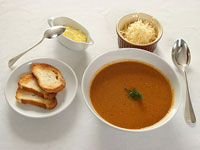 Sales of the condensed soup, which have been revitalized in the last few years after a long, slow decline, slipped 1%. But ready-to-serve soup sales were up by 8%.

Lower-sodium soups have done well, the company reported, as have V8 juices and Pace Mexican sauces and its Pepperidge Farm brand cookies and crackers.

But six-month sales rose 7% to 4.4 billion dollars from the same period a year earlier.